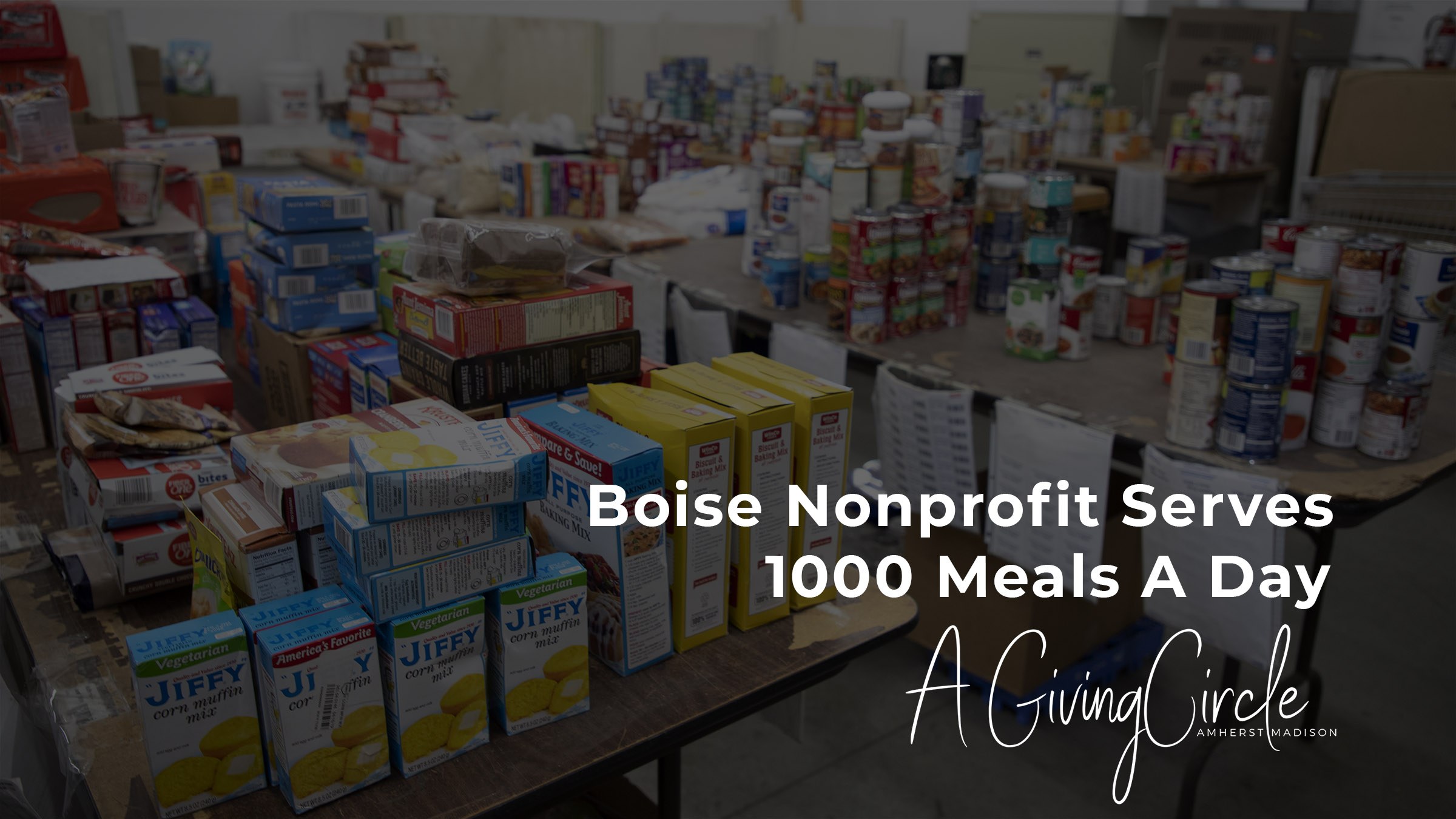 “Three hots and a cot” was the tagline Reverend Bill Roscoe used to describe what the Boise Rescue Mission set out to provide back in 1958 when it first got started. A single white male with fewer than eight years of formal education was the typical vagrant that would make his way into the Mission for the night. Drifting across the country via railroad looking for work, three hot meals and a cot to sleep on was a rescue indeed. A lot has changed in rescue work for the Mission since its origins. Reverend Bill shared in our recent visit that rescue work today is all about change.

Today’s biggest change affecting rescue work are the many different causes of homelessness. Serving, assisting, and rehabilitating the homeless is not a single overnight task. The homeless in our communities today did not jump off a box car. Many of them grew up here, went to school here, had good jobs here. The circumstances that bring people in need to the Boise Rescue Mission today are far more complex than just being on the move and looking for work. With those complexities the Mission has evolved, grown, and adapted over the years. Today the Boise Rescue Mission operates seven different facilities throughout the Treasure Valley. Their annual operating budget currently sits at 6.2 million dollars. That staggering figure is realized each year without any assistance from the government.

Reverend Bill shared shared that many sources of funding allow them to keep the lights on and operating at a high capacity every single day. He spoke of the many generous local foundations that give annually. These foundations cover about 15 percent of their costs. He went on to say that it is the continuous charity from our communities that make up that big difference in funding their operations.

We raise all the money that we spend right here in our community. That’s a challenge, and it takes a lot of people working really hard. To make contact with people, to round up new donors, keep the income coming in we need to serve the people. As you can imagine the costs to run a rescue mission today are quite different and quite higher than they were 25-30 years ago. Just the utilities alone, the water, the garbage, the electricity, the phone system. And now we have to have technology, we have all the internet services and computers, cell phones, and smartphones. It’s quite a demand.

For most active citizens it is quite common to spend 10 dollars on any fast food meal or 20 to 30 dollars for a sit down dining experience. The team at the Boise Rescue Mission has boiled their average meal cost down to near two dollars each. Within their four dining rooms they serve 1,000 meals a day to our homeless population and families in need. One thousand meals per day! Chew on that for a minute. It’s not just monetary donations that keep the Rescue Mission’s doors open. Local restaurants, grocery stores, food suppliers, and distributors all participate in a finely tuned collaboration to bring it all together. Then there are the countless volunteers that donate their time, energy, and strength to make a daunting task feel almost routine. Walking through the warehouse facility on 27th Street in downtown Boise you get a sense of the constant state of flux.

We often see the media coverage during the winter holiday season spotlighting many of the needed services provided by the Boise Rescue Mission. The needs for fundraising, donations, and volunteer support are not seasonal. Their diligent staff work daily to organize food drives within local businesses year round. It’s not just food either. Reverend Bill shared more about what it takes to keep this important rescue work going.

We are averaging between 400 and 500 men, women, and children in shelter beds every night. So we’ve got to have 24/7 staff at all four of those facilities. We’ve got to have really good security. We have cameras, and locks on the doors, and buzzers to get in. To provide the clothing that we give away, 1600 articles of clothing a month. Some months it’s much higher than that. When the seasons change, all of a sudden we have a demand for spring clothing, and we have to go out and get that. It takes a lot of effort and a lot of community support. One thing I’ve said for seventeen years that I’ve been here is this is the most generous community on the face of the earth. I’ve lived all over the country and I’ve never seen compassion and caring in a tangible way such as we see right here in the Treasure Valley.

Backing up a step to explain why we visited the Boise Rescue Mission requires a little story telling. It was nearing the end of September in 2018 when CEO and Founder of Amherst Madison, Nick Schlekeway, decided to make a big change to the agency’s annual holiday party. That was when A Giving Circle was born. In just under three months time the event was organized and brought together with the help of staff, agents and many willing and helpful sponsors. The Agents from Amherst Madison nominated local nonprofit organizations as beneficiaries of the fundraiser. From the nominations five were chosen.

Fast forward to December 7th, 2018 to the packed Crystal Ballroom at the top of the Hoff building in downtown Boise. The energy was electric and the auction paddles were flying. $112,500 in total was raised that night for the five nonprofit organizations. The Boise Rescue Mission was gifted a check for over $14,000 that night. Reverend Bill shared his thoughts about that gift and what it meant to his ministry services.

That gift makes a significant impact in serving as many people as we do every day. Your 14,000 is added to the 5,000 from over here, and to the folks that send us every month $25 or more or less. You take all of that together and it meets the needs of the Rescue Mission. It’s really an amazing thing when you consider that our budget is over 6 million dollars a year. We are making that budget because of agencies like yours, businesses, churches. Mostly it’s going to come from you folks and the people in the valley here that want to show their compassion by giving. I want to tell you that your money is well spent here because we have a dedicated team of people here that are committed to doing the work of rescue. We are all here because we love God, we love people, and we want to be useful and helpful to people. With that, that dollar goes a long way. Those people that serve here as their vocation are extraordinarily generous people themselves. That makes it all work. God knows exactly what we need this day, today. Believe it or not, at the end of the day we always have what we need. Not always what we want, and hardly any extra, but we always have what we need.

The nomination for the Boise Rescue Mission came from Mark Stevens, a top producing REALTOR® for Amherst Madison. In talking with Mark about that nomination he shared that his own father-in-law had been selected to have a room named after him in the Veterans wing of the Rescue Mission’s facility on 13th Street. Mark volunteered with his family to remodel that room and get it ready for Veterans needing food and shelter during their time of rehabilitation back into society. Mark was thrilled to see his nomination selected as a beneficiary of the inaugural event for A Giving Circle. He went on to share his thoughts about the event as a whole.

I love working at Amherst Madison and the whole thought of giving to the community isn’t just a buzzword or phrase, it actually happens. Here we are basically at our Christmas or holiday party and everybody is really focused on the idea that we are here for the benefit of five different nonprofits. That says volumes for what the company is all about, and it really made me feel great. It made me feel great to be a part of a company that didn’t just say those things, but actually did those things. 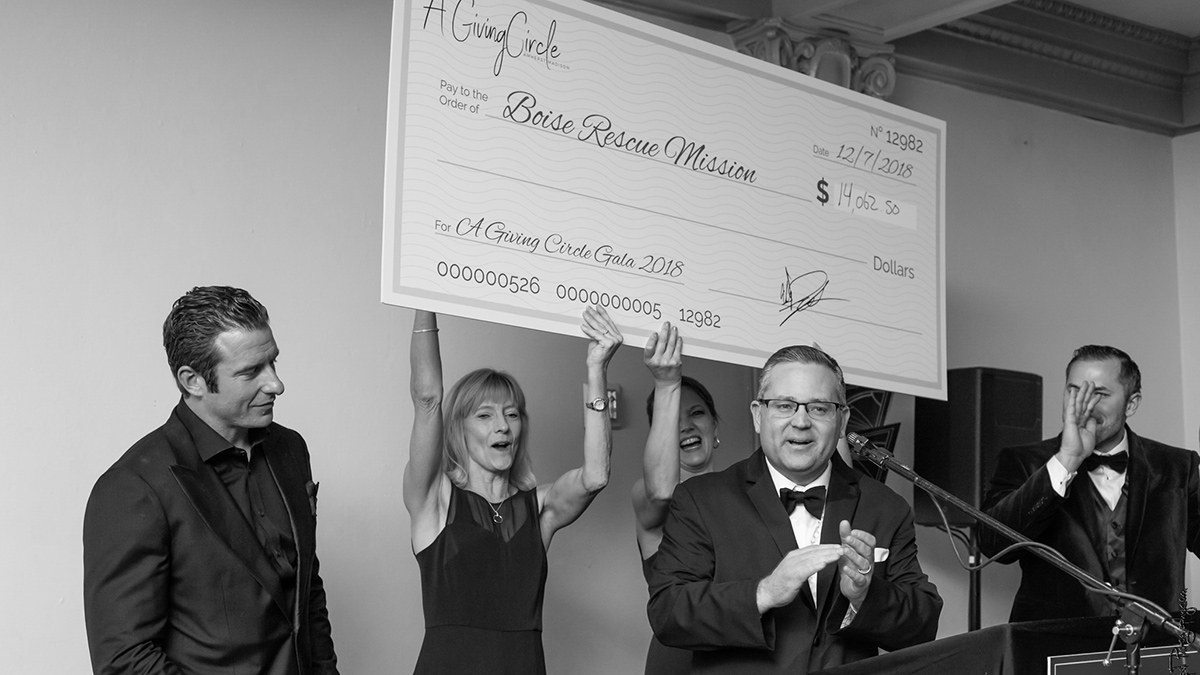 The second annual event for A Giving Circle is on the calendar for Saturday, December 14th, 2019. All nominations for local Idaho nonprofits have been submitted for 2019. A Giving Circle board members will soon choose three nonprofits for this year’s event. Our goals for year two are big! It will take not only the participation of attendees but willing sponsors that understand the true value this will bring to our communities. Nick Schlekeway summed up the realization of how it is our responsibility to turn our good fortune into something more for the community.

From day one it was about something that would make a difference. We’ve been looking for years for a way to channel that passion. I’ve grown to almost dislike the term giving back, because giving back implies that something has been taken and stolen in the first place. This is very very important; it’s not optional. It’s critical to the future success and health of our communities that we participate and take part. This is an investment.

It’s never too soon to get this event on your calendar. The Holiday season is busy and schedules fill up fast. Please take a moment to visit our Facebook event page for the second annual A Giving Circle fundraiser gala.

Related Articles
Press A Giving Circle Announces 2019 Nonprofit Beneficiaries Amherst Madison Real Estate Brokerage Prepares For Year Two Of A Giving Circle   “We’ll raise a hundred thousand dollars for local nonprofits that are impacting our communities” he said. Nick Schlekeway, CEO and founding partner of Amherst Madison, raised some eyebrows late last year when he threw out the $100k figure to his partners, agents […]
Social Mission - A Giving Circle Wounded & Injured Veterans Find Spirit Animal Towards College & Career Wyakin Foundation Sees Record Program Enrollment To Support Veterans   “Breakfast burritos are my spirit animal” or something cute and quirky like that is quite commonplace to hear or read on social media these days. These popular alter ego, guardian mascots have a more serious origin. Spirit animals were originally named a “Wyakin”. Weyekin or Wyakin is a […]
Social Mission - A Giving Circle Fashion Truck Helps Idaho Women Get Hired A Giving Circle: Dress For Success Follow-up Sitting there on the front dash of the truck was a brown name plate, the kind you typically find on a very traditional office desk. It read, “This Girl Can”. That one simple phrase sums up the attitude of empowerment that Dress For Success gives to all women […]